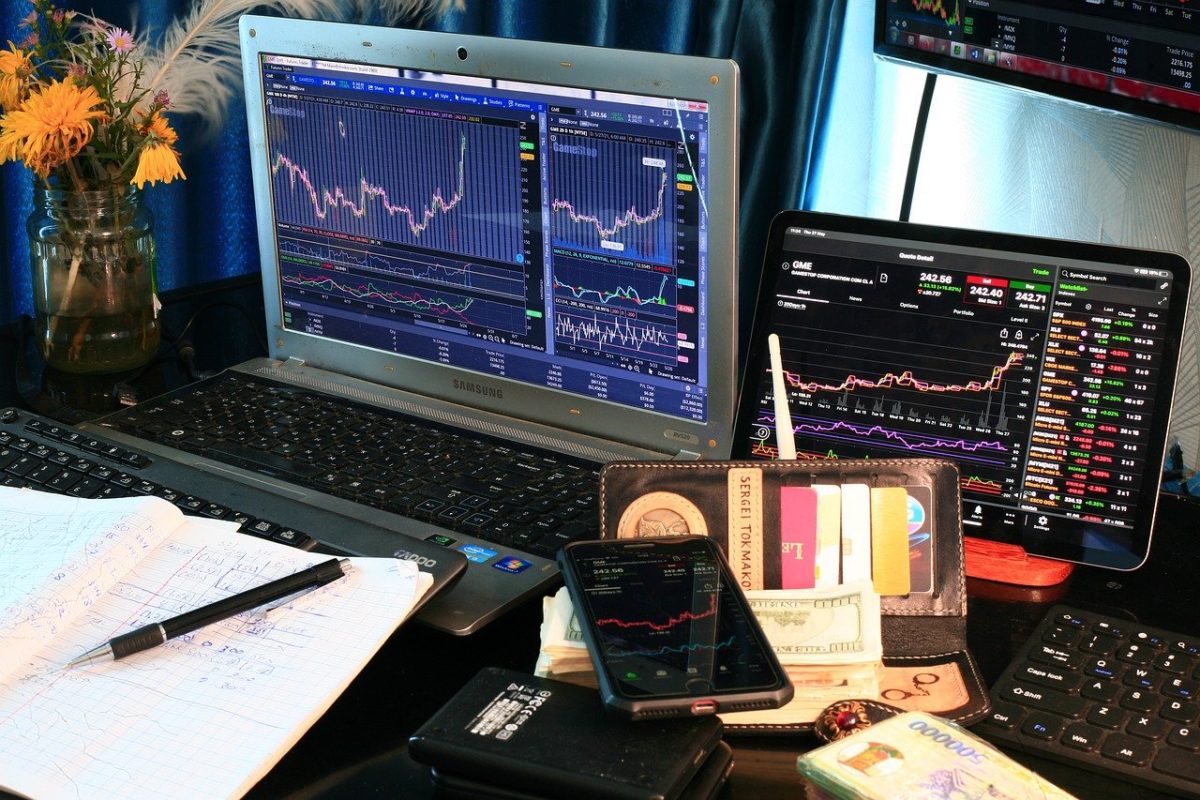 The foreign exchange market, also known as the forex market, is the largest financial marketplace in the world. On average, volumes equivalent to over five trillion dollars are traded in foreign exchange every day.

Forex trading is based on the different exchange rates, the foreign exchange rates. These often change every minute and are influenced by various factors.

In our article you will learn, among other things, what factors influence forex trading and thus CFD trading, if the corresponding underlying is a currency or a currency pair.

In total, there are almost ten factors that can cause a change in the exchange rate. We would like to discuss the most important influencing factors in our article, namely:

Knowing these influencing factors is therefore very important because, for example, before upcoming decisions in the political or economic field, you can at least predict with a greater probability whether they will have a positive or negative impact on certain currency rates.

One of the most central factors influencing forex trading and the change of currency rates are the central banks with their respective monetary policies. You should know that the central banks around the globe, for example the European Central Bank, have various instruments and monetary policy measures at their disposal. Taken together, these aim to keep the respective inflation rate at around two percent. Neither a significantly lower nor a significantly higher inflation rate is desired.

This is mainly due to the fact that central banks such as the ECB see themselves as guardians of the respective currency with the goal of monetary stability. Not only the measures taken by the central bank, but also its opinion on future developments sometimes have a greater influence on currency rates. In addition, the ECB can influence interest rates on the market via the key interest rate. This can influence currency rates because the level of interest rates on the market is decisive for the return that can be achieved with an investment in the respective currency.

This is where the decisive influence on currency rates and thus on Forex trading comes into play. The higher the return on an investment in a given currency compared to an investment in other currencies, the higher the demand for that currency. For this reason, the increase in the key ECB interest rates usually has the effect of increasing the corresponding exchange rate, for example, euro / US dollar. Therefore, players in foreign exchange trading know that it is promising to speculate on a rising euro in time.

We have already briefly touched on the influence of interest rates in the previous section. It should also be noted that not only the key ECB interest rates play a role, but also the investment interest rates of the banks, which are often derived from them. The higher these are, the more likely investors are to invest in products with the corresponding currency, which in turn results in rising exchange rates. The currency in question thus gains in value compared with other currencies. If the ECB raises the key interest rates and this results in higher interest rates at the banks, this would lead, for example, to the euro / U.S. dollar exchange rate - at least in theory - losing value against the euro.

Likewise, the currency rates and thus also the CDF trading with foreign exchange are influenced by inflation. It is usually the case that currencies such as the euro gain in value when the inflation rate tends to be at too low a level. This means that market participants and experts actually expected lower rates. However, exceeding the expected rate of price increase is then interpreted as a sign of positive economic development. This in turn would lead to the market becoming more interesting for investors.

The consequence of this is that the corresponding currency also gains in attractiveness. Put simply, one could therefore state that a rising inflation rate often leads to a likewise rising exchange rate. However, one has to distinguish between a short- to medium-term and a long-term development. It is not uncommon for the respective currency to be burdened by a rather high inflation rate in the longer term. This is especially true under the condition that the rate is very high, such as currently in:

There, the inflation rate is hovering at a level of over 10 percent. As a result, investors lose confidence in the currency due to the devaluation and therefore prefer to shift their money into other currencies. This can result in a sometimes significant slide in the respective exchange rate.

Political decisions can also have an impact on foreign exchange rates and Forex CFD trading. Although central banks are supposed to act autonomously in principle, it is not uncommon for political decisions to affect the actions of central banks. For example, sanctions and tariffs decided by politicians against other countries can have a direct influence on currency rates.

In part, the confidence of investors and market players plays a role in this area. If this decreases with regard to certain currencies, this usually results in a decline in the respective exchange rate. However, political decisions often have an indirect character when it comes to the impact on the exchange rate and the foreign exchange market. Therefore, some expertise and interpretation skills are required at this point to predict how one or another policy decision might affect the currencies.

In the event of poor economic development or even a recession, there have often been cases in the past where a currency has been devalued so that international competitiveness is not lost. When looking at economic developments and their possible impact on foreign exchange rates, it is always important to take a closer look at price and interest rate differentials between the domestic and foreign markets. Indeed, changes in foreign exchange rates often occur on the basis of such interest rate and price differentials.

If, for example, there is a greater increase in the price level in the United States than in the euro zone, the euro countries would demand fewer goods and services from abroad, in this case from the USA. This in turn means that there is less demand for the U.S. dollar. In addition, however, demand in the USA for domestic, i.e. European, goods and services increases.

One consequence is that domestic goods are comparatively cheap for the USA, which should lead to growing exports. As a result, more foreign exchange is earned. Ultimately, it follows from this economic development with the shifting of the demand and supply curve that the euro / dollar exchange rate had to rise.

The foreign trade balance primarily records trade flows between the domestic and foreign markets. These can also influence the exchange rate. For example, if Japan exports more goods to Germany than before, this usually has the effect of increasing demand for the Japanese yen in this country. The reason is that the yen has to be used to pay for the increased imports from Japan. Let us now assume that the Japanese central bank does not expand the yen in the market. Then the demand would increase with an identical supply of yen, which would normally result in an increase of the yen rate on the Forex market.

At this point, however, the cycle continues. The higher yen exchange rate makes the Japanese currency more expensive for German importers, so demand gradually declines. Another effect is that the appreciation of the yen makes products from Germany and other countries cheaper for Japanese. As a result, imports from Japan are rising. At this point, the exchange rate has the task of achieving, in the best case, that the foreign trade balance is balanced.

In the context of so-called purchasing power parity, it is assumed that two different currencies have identical purchasing power. In other words, you could, for example, buy the same basket of goods with X amount of U.S. dollars as with the same amount X of euros. In that case, the real euro / U.S. dollar exchange rate would be 1. From this, we can deduce that purchasing power parity is used to compare the cost of goods and services between countries. However, the actual exchange rates of the currencies involved play no role in this context.

Influence can have the system of purchasing power parity on the exchange rate in theory because it is assumed that the exchange rate of the two currencies involved is influenced by the purchasing power in the respective countries. To illustrate this, let's take the following example: A smartphone currently costs 400 euros in Germany and (converted to euros) 600 euros in the United States. Based on this price comparison, it would naturally be very attractive to buy the smartphone in Germany and then sell it in the United States at a profit. In this way, so-called arbitrage profits, in the example amounting to 200 euros, could be achieved.

The theory of purchasing power parity is now that there will be no arbitrage gains in the long term because the difference in prices will be offset by an adjustment in the exchange rate. This in turn would mean that the smartphone will also cost 600 euros in Germany in the future due to an increase in the euro exchange rate against the US dollar. Consequently, purchasing power parity is based on uniform prices in the various countries.

Thus, the foreign exchange market will be in equilibrium between two participating currencies or countries only under the condition that the yields at home and abroad are identical. However, since this is rarely the case in practice, yield differences between two countries almost always have an impact on the development of the respective exchange rate.

The process in that case is that foreign currencies are in greater demand if, for example, the return on investments in the USA is higher than in Germany. This, in turn, would lead to the American dollar becoming stronger and rising against the euro. The reverse case can of course occur in exactly the same way, namely that the euro gains in value against the U.S. dollar when yields are higher at home.

How does Forex trading with CFDs work?